A Little More About Jon Lee

A Little More About Jon Lee 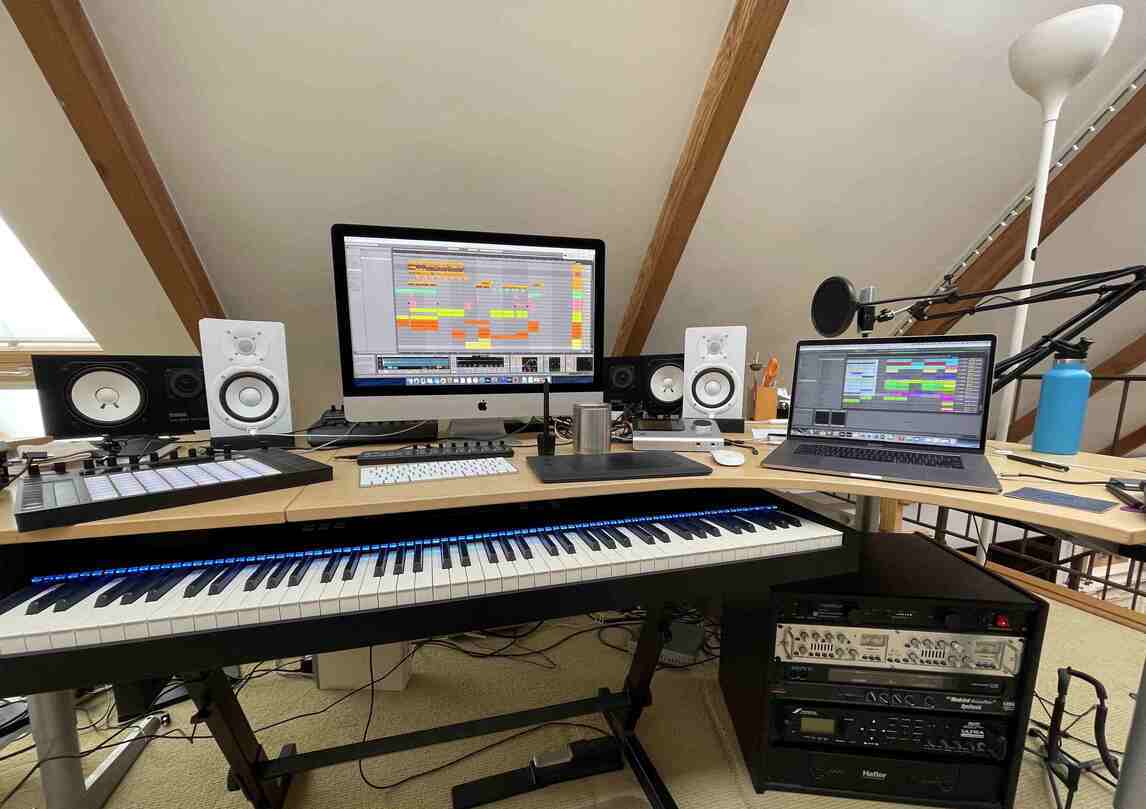 Let me introduce myself. My name is Jon Lee.

I am a professional film and television music composer. I also write and produce songs. I am a classically trained pianist and composer and I am very comfortable writing for an orchestra.

Electric guitar never made its way into my writing or playing. While I have made a nice living as a composer for the last twenty years, guitar playing was really the missing link in my musical arsenal.

Three years ago I made the commitment to practice playing guitar three hours a day at least five days a week. That may sound like a lot of time, but really if you just do an hour in the morning and then another hour around lunch, getting to the third hour is pretty easy. I also promised myself that I would not be overly critical of my progress or skill level, and I would just play for the joy of making music.

Looking back, learning to play electric guitar competently has been one of the best decisions I have ever made. For one, it has really opened up my ears to a whole new array of sounds and articulations. The guitar is an excellent proxy for the human voice, and the fact that you must find tones and pitches also really fine tunes your ears. This in turn also helps your singing.

I have written music by inputting notes on a keyboard for almost two decades now, and writing music by playing in live guitar riffs or lead lines has been a welcome change. A new thing I learned along the way is that the guitar can also be a drum, and writing drum parts from the guitar introduces a lot of unexpected ideas into the writing process.

I have written a much larger amount of background score music than I have songs with words. For one, score is a lot easier to write, and two, that was my primary job. Don’t get me wrong, I love to write songs, but I think finding a memorable melody and marrying it to a clever observation of the truth is not something that just happens all the time. But I think as a musician or creative artist, it is important not to just stay in one place or lane.

Going forward, I am really excited to spend a lot more time songwriting versus score writing. I think of songs as puzzles and it is fun to solve them musically.

Early in my composing career, I briefly worked in the same studio as The RZA. He told me that he tried to incorporate a new instrument or piece of gear into the score on every new film or music project. I think it is easy for people to always rely on the same guitar sound, or synthesizer, so I decided to stop using the music software I used for the last 12 years (Apple Logic) and started from scratch with a new software favored by electronic musicians (Ableton Live). Honestly, I prefer new software, and the music I am writing now.

I also traded my regular studio for a portable rig, so I can move around or travel (when Covid-19 recedes) and write from different locations.

The lesson I learned through all of these changes is that the best thing you can do is to keep making yourself uncomfortable artistically. Pursue musical uncertainty often and just see what happens. I think that is also true of life. As we get older, we tend to shy away from new and unpredictable things and stay with what is familiar. I am trying to avoid the latter as much as possible.

On this website, I add snippets of some of the new stuff I am working on, and some finished pieces as well. Checkback often to hear plenty of music and also some videos of me performing.

I recently read “How to Write One Song” a great book by Jeff Tweedy. he talks about how to improve as a musician or songwriter. One of his major points is you have to be ok with sounding really bad in order to get better. Early in my career my music did sound pretty bad, and even now, some of what I write still sounds terrible to me. But occasionally I create something really good, and when I do, you will find it on this website.

Thank you for listening.

We use cookies on our website to give you the most relevant experience by remembering your preferences and repeat visits. By clicking “Accept”, you consent to the use of ALL the cookies.
Cookie settingsACCEPT
Manage consent

This website uses cookies to improve your experience while you navigate through the website. Out of these, the cookies that are categorized as necessary are stored on your browser as they are essential for the working of basic functionalities of the website. We also use third-party cookies that help us analyze and understand how you use this website. These cookies will be stored in your browser only with your consent. You also have the option to opt-out of these cookies. But opting out of some of these cookies may affect your browsing experience.
Necessary Always Enabled
Necessary cookies are absolutely essential for the website to function properly. These cookies ensure basic functionalities and security features of the website, anonymously.
Functional
Functional cookies help to perform certain functionalities like sharing the content of the website on social media platforms, collect feedbacks, and other third-party features.
Performance
Performance cookies are used to understand and analyze the key performance indexes of the website which helps in delivering a better user experience for the visitors.
Analytics
Analytical cookies are used to understand how visitors interact with the website. These cookies help provide information on metrics the number of visitors, bounce rate, traffic source, etc.
Advertisement
Advertisement cookies are used to provide visitors with relevant ads and marketing campaigns. These cookies track visitors across websites and collect information to provide customized ads.
Others
Other uncategorized cookies are those that are being analyzed and have not been classified into a category as yet.
SAVE & ACCEPT
Skip to content